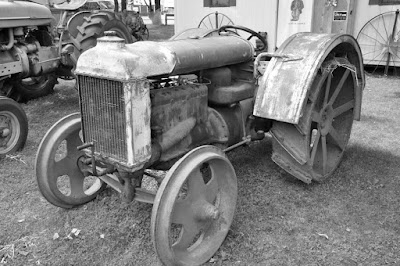 This tractor is a Fordson Model F built from 1917-1928. The company name was Henry Ford and Son, Inc. got shortened to Fordson for the tractor name. This was the tractor that out competed horses on farms and put many of the manufacturers of steam traction engines and giant oil pulls out of business. Henry Ford designed this tractor to use some of the same parts as in his cars and trucks. The Nebraska Tests measured 14 drawbar horsepower and 26 belt horsepower making it perfect for agriculture. It pulled 1813 pounds at the drawbar at 3.21 miles per hour. In 1921 Ford sold 35,000 of these machines in the U.S. and around the world. Sales increased to 67,000 in 1922, and 100,000 in 1923.

It originally sold for $785 (equal to $10,829 in 2015 dollars), but when International Harvester and John Deere brought out competitive tractors, Ford dropped the price to $620, and then later to $395 (or $5,422 in 2015 dollars). In 1928 Ford dropped the tractor business, but continued to supply motors to Harry Ferguson in Great Britain who made many advances on the Model F eventually resulting in the 1939 Model 9N built in Ireland and imported into the U.S. as a Ford-Ferguson. They were later built in the U.S. by Ford to become the most popular tractor of all time. By 2001 half of all  9N Ford tractors were still in operation while the other half are stored waiting for restoration.
Posted by Taken For Granted at 9/11/2015