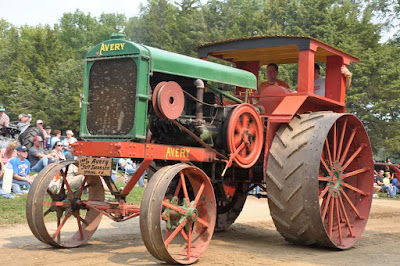 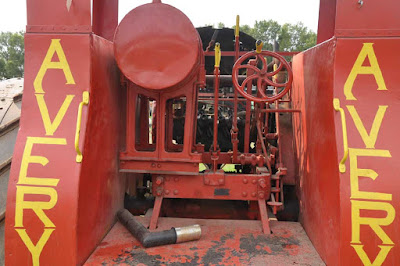 This 1920 Avery 25-50 built in Peoria, Illinois is called that because it produced 25 horsepower at the draw bar and 50 horsepower at the belt pulley. These "oil pulls," so called because they burned kerosene, were often used to power belts that ran thrashing machines and saw mills, but they also pulled implements in farm fields. While the horsepower numbers are not impressive, these machines produced large amounts of torque to pull six plow bottoms through tough soils. The motor is four cylinder, horizontal opposed, valve in head, with a bore of 6.5 inches and stroke of 8 inches. It was designed to run at 700 RPM. In low gear it went two miles per hour and in high gear it goes three miles per hour. Depending on how hard the tractor is working, it burns between five and seven gallons of kerosene per hour so with its fifty gallon fuel tank it could work eight to ten hours. This tractor weighs 12,500 pounds. The Avery Machine Tool Company went out of business in 1924 because farmers were looking for smaller, lighter, cheaper tractors which could be operated by a single individual.
Posted by Taken For Granted at 9/01/2015