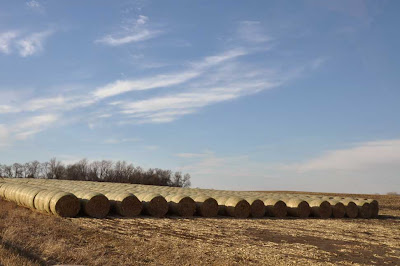 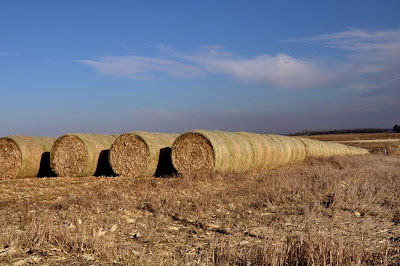 These rows of large round bales are composed of corn stalks. In years past this material might have been used as bedding for cattle or horses, if it was used at all. Mostly corn stalks were plowed back into the soil to add to soil health. Now corn stalks are being chopped and mixed with distillers grain from ethanol distillers so this by product might be fed to cattle. Forty percent of all SD corn grown is fermented into ethanol. After this grain has been ground into flour, mixed with water, and allowed to ferment into alcohol and carbon dioxide, it is distilled into alcohol. The left over dried grain flour and yeast can not be fed directly to animals as it is too rich for them to digest. Fiber needs to be added, and corn stalks have an abundance of fiber. Feed lots use many tons of distillers grain which has created a market for baled corn stalks. Corn farmers now have another crop to sell that in the past was of no economic value. But we are left with some troubling questions. What is the consequence for soil to have this material removed every fall? Is this feed mixture healthy for pigs and cattle? Is it healthy for us to be eating animals fattened on his feed? What are the real hidden costs to burning billions of gallons of ethanol in our cars and trucks?
Posted by Taken For Granted at 11/20/2012