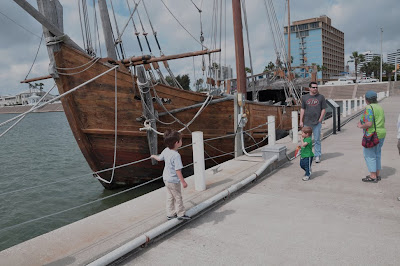 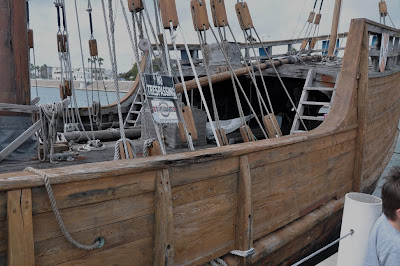 Last weekend we were in Corpus Christi where we saw a replica of Christopher Columbus's ship Nina. It had been built decades ago, and was showing signs of aging with a few places where wood rot had taken its toll. My impression is that the sailors on the first voyages to the new world were hearty soles. Below decks were filled with cargo, such as water, beer, wine, and farm animals like horses, cows, pigs, and chickens. There was little room below decks for anyone to sleep, so they slept on deck which was often awash in waves. Cooking was done in a fire box on the foredeck, and hot meals were only possible in reasonably calm weather. Hard conditions coupled with fear of the unknown, leaky small boats, and an endless ocean must have been terrifying. Many of the private yachts tied up at Corpus Christi were much larger than the Nina, and I'm not sure I would like to cross an ocean in them either.
Posted by Taken For Granted at 4/18/2010