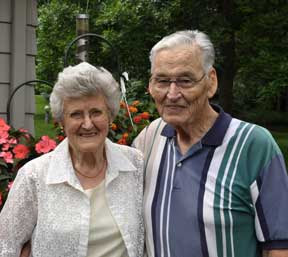 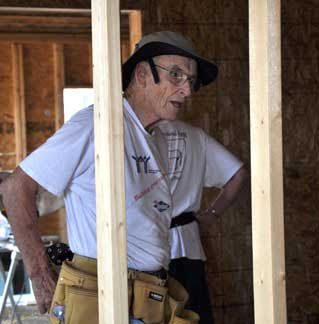 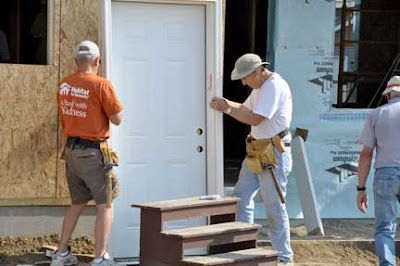 This is my friend Lloyd who turned ninety years of age this spring. Lloyd lives with his wife of 61 years, Maxine.  He is a retired civil engineer who donates one day a week to build Habitat For Humanity houses in our community. He first became involved with Habitat in 1993 when he joined President Jimmy Carter in building 20 homes in Americus, GA. In 1994 he was involved constructing Habitat homes on the Indian Reservation in Eagle Butte, SD, and in 1996 he helped build homes in Vac, Hungry north of Budapest. Since then he has helped construct 53 Habitat homes in Brookings, SD. Among the tasks he enjoys doing, and is very good at, include laying out and building interior walls and putting down flooring. Given his engineering background, he reads blueprints and can transfer precise measurement to the subfloor locating walls, doors, closets, and hallways. In the photos above he inspects his work on walls and installs the front door with Lynn, a retired H.S. shop teacher.
Posted by Taken For Granted at 8/06/2013