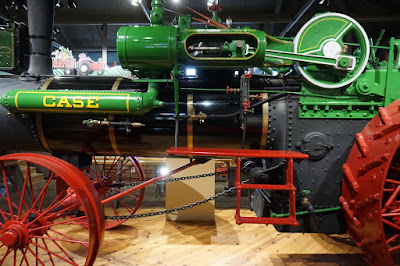 This is a 1915 65 hp Case Steam Traction Engine at the SD Agricultural Heritage Muesum. This was the first type of tractor to work in agriculture. It often was used as stationary power using belts to run machines, but they also pulled plows to replace draft animals. It took about 25 people to keep one of these running during harvest, and they were very expensive, so thrashing crews often went from farm to farm to help harvest crops. Individual gas tractors did not become commonly available until early in the 20th Century.
Posted by Taken For Granted at 12/11/2017