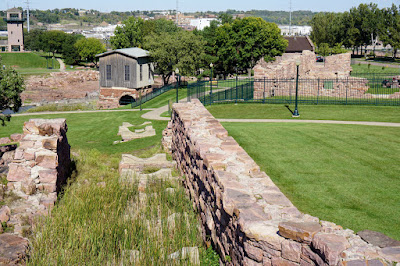 This is the ruins of the Queen Bee Mill that initiated the town of Sioux Falls, SD. There is a story here. A number of locals wanted to build a mill using the water that flowed over the falls, but the Minneapolis bankers were not willing to invest money for building the mill unless they could see that there was enough water to power a mill through the dry summer months when rain became intermittent. The bankers traveled to see the falls in the later summer. They were expected, so the locals built a temporary dam upstream from the falls and arranged to have the dam removed just before the bankers went to measure the water flow. Was this fraud? Most certainly it was, but they got the money to build this mill because the flow of water over the falls was substantial. Unfortunately the Queen Bee Mill only operated for about a year as there was insufficient grain grown locally to keep it in full operation. While the mill closed, the town of Sioux Falls became well established.