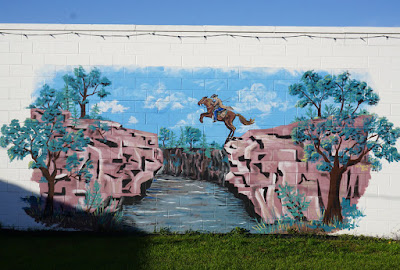 This mural is in Garretson, SD where Jesse James jumped the Devil's Gulch in 1876 while being chased by a posse of twenty armed men, or so the story goes. He was fleeing his gang's raid on the bank in Northfield, MN. Theoretically this jump is possible. The gap is reported to be between 18-20 feet, and horses have jumped over 27 feet. But the consequences for missing this jump is a plunge of six stories to Split Rock Creek into a pool said to be bottomless. Members of the posse claimed they saw Jesse make this jump and they did not dared to follow. A month later Jesse James returned home to Missouri.
Posted by Taken For Granted at 10/23/2017