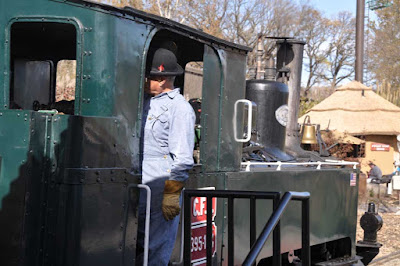 I went on line and found some information about this steam engine. If you are interested keep reading.
"No. 395-104 was built by Krauss in Linz, Austria in 1890. The locomotive, a 0-6-2T, is named Riva and is one of three sister locomotives built in 1890 for the Mori Arco Riva del Garda Tramway (M.A.R.) located on the southern edge of the Austrian Empire at Lake Garda (now Italy). She worked there until 1915 when the rail line was heavily damaged due to the war. She was turned over to the K&K Feldbahn and served on the military railways during World War I stationed at Stryj in Galizien, now Ukraine, until 1939. In the mid 1930’s, at the beginning of World War II, the area was taken over by Russia. In 1939, Germany captured the area and brought Riva to Siebenburgen, then part of Hungary, renumbered as 395-104 and worked the Magyar Allamvasutak (M.A.V.), Hungarian State Railways, until 1944 when the area fell to Rumania. She finished out her days on the Caile Ferate Romane (C.F.R) working on the Alba Iulia Zlatna line until retirement in 1968. From 1968-1973 Riva was owned by Plasser & Theurer of Vienna, Austria. With the help of Union Pacific Railroad, Joseph Theurer, President of Plasser & Theurer, donated the locomotive to Omaha’s Zoo in 1974. Union Pacific’s Omaha shops rebuilt parts of the locomotive to bring the Riva up to U.S. operating standards. By 1976 the locomotive was chuffing along pulling coaches full of delighted passengers once again."