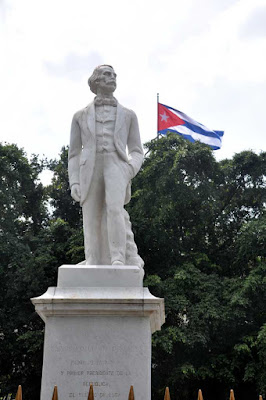 Carlos Cespedes was a Cuban lawyer and revolutionary who freed the slaves on his sugar plantation, and asked them to join him in his revolution to free Cuba from Spain. He called for independence from Spain in 1868, and became Cuban President in 1869, but lost power in 1873.  Plantation owners sympathetic to Spain assassinated him  in 1874.  His call for revolution began the ill fated "Ten Years War," but lit the flame leading to independence in 1898 when the Spanish lost the Spanish-American War.

The Spanish claim they could have held Cuba except for American intervention. The Cubans claim they had the Spanish all but defeated before American intervened. Reasons for the Spanish-American war are open to conjecture. Many contend that yellow sheet journalism by William Randolph Hearst to increase his New York City newspaper's circulation fanned the flames of war. Another possible reason is that secret negotiations between the U. S. and Spain to buy Cuba fell through the year before. Perhaps both reasons apply? The sinking of the Battleship Main in Havana harbor was likely due to a boiler explosion, not a limpet mine planted by the Spanish Government as Hearst claimed. Because the American 1898 declaration of War against Spain contained the Teller Amendment, proclaiming an independent Cuba, (but not Puerto Rico or the Philippians), the island did not become American territory as did Puerto Rico and the Philippians. The U.S. granted full independence to the Philippians on July 4, 1948, but the Philippians Independence Day is now celebrated on June 12 dating back to 1898 when the Spanish were defeated.
Posted by Taken For Granted at 5/21/2016