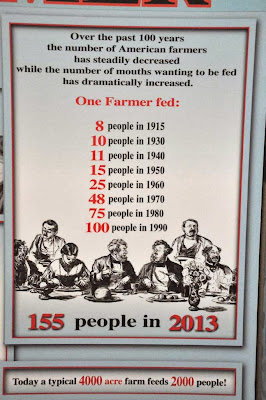 This poster only tells part of the story of modern agriculture. Yes, farmers have become more productive. Factors such as the "green" revolution of chemical fertilizers coupled with genetically modified plants have made a contribution. Also larger, powerful machinery has contributed. But there is a darker side to this story which should concern us all. Farm and ranch size has increased dramatically as farmers and ranchers sell their land to larger and larger corporate farms. These large corporate farms are mostly concerned with making a profit, not with preserving the land for future generations or raising crops in a way to provide the best quality. The rural area of our nation is being rapidly depopulating. Farmers are more productive because there are fewer of them. There was a denser rural population in South Dakota when it was opened by the Homestead Act signed by Abraham Lincoln than it is today. As farms grow in size the rural population will continue to decline. The owners of the land are further and further divorced from the production of that land. Small towns are rapidly declining and disappearing unless they are adjacent to cities.

Less and less of our food is produced on farms. Animals such as chickens, turkeys, hogs, and increasingly cattle come from factory operations, not farms. Animals are held in confinement where they have no freedom of movement and are fed on diets designed for the fastest possible weight gain. Animals seldom, if ever, see sunshine, blue sky, or green fields. In order to keep disease from running rampant through these dense populations, animals are fed a steady diet of antibiotics. While it allows animals to survive in horrible conditions, it means we also get a steady low dose of antibiotics in our food. This can result in the development of antibiotic resistant strains of bacteria. We are increasingly seeing outbreaks of diseases in humans that fail to respond to medication.

Farmers have gotten out of the animal production business because they can not compete with factory production, and the markets for animals no longer exist. As a result the remaining farmers have become mostly grain farmers growing corn, soybeans, small grains, and hay. With an increasing amount of corn going into ethanol production, farmers are getting away from the food production. Now the grain used in alcohol production is eventually fed to animals in confinement operations, but it must be mixed with a source of fiber so as not to be poisonous for them. Also distillers grain is a waste product of the ethanol industry which must be disposed of in some way, and feeding confined animals is a solution.

This method of producing food for our large population is not sustainable over any long period of history. Soils deteriorate under constant corn and bean production which must be sustained by petrochemical fertilizers.  The quality of the American diet is deteriorating. As a nation we can not maintain a healthy population on fast food. Obesity has become epidemic. To learn more about these issues see the writing of Michael Pollen and others discussing the ecology of agriculture.