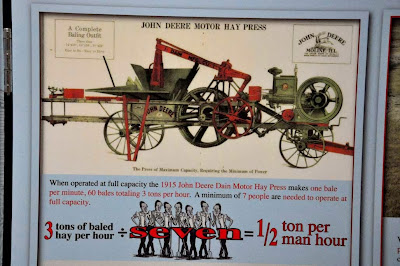 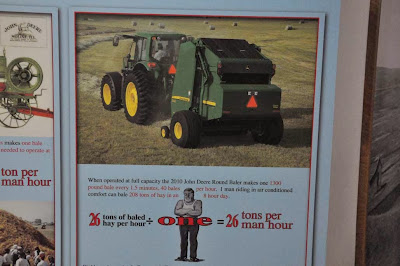 I have worked as a crew member on a 1915 Dain John Deere Hay Press at antique farm machinery shows. We had a great time doing this. The work was not especially difficult, but it was dusty. We always drew a crowd who were interested in watching this unusual machine operate.

The modern John Deere round baler is 520 percent more efficient and requires only one seventh the workers to get the job done. This is a part of the reason for the decline in the number of farmers. In the 1960s roughly three percent of the American population had farm occupations. Today only about one quarter of one percent are farm or ranch owner-operators. Of course there are other farm workers, but their numbers are not large, and they are often migratory. No wonder Congress has not passed a Farm Bill. There are not enough farmers out there to influence elections. Up through the 1960s farmers were an important voting block in national and state elections, but now they can be safely ignored by politicians. Recent Farm Bills have mostly benefited large scale, corporate agriculture.
Posted by Taken For Granted at 12/29/2013