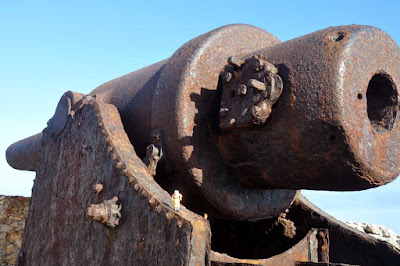 This cannon was made by Krupp Steel in Germany, and likely placed here by the Spanish circa 1880. It was part of the defense of Havana. This is an early sliding block, breech loading cannon. Some modern cannons still use a similar sliding breech block mechanism. Don't believe it was ever fired in anger as the American forces did not sail directly into Havana harbor during the Spanish-American War.
Posted by Taken For Granted at 4/30/2016