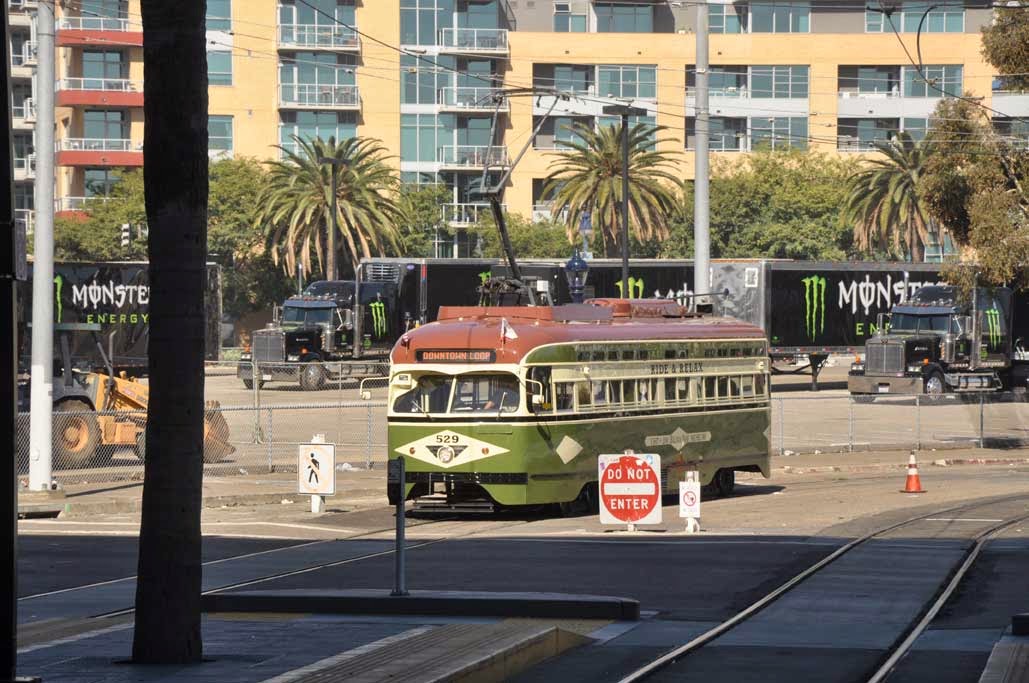 Streetcars are a rare sight in American cities. The story of our loss of streetcars is both checkered and highly debated these days. There are some who content that their loss is a direct result of a conspiracy in collusion with General Motors, Firestone Rubber, and Standard Oil of CA, Phillips Petroleum, and Mac Truck. Others suggest that their loss was inevitable given our love of private automobiles. GM created  dummy corporations for the purpose of eliminating streetcars from American cities and replacing them with GM buses and private cars. One of the largest of these dummy corporations was National City Lines, 1938-1950. They converted streetcar systems to buses in L.A., Oakland, San Francisco, Chicago, San Diego and other cities. This involved the abandonment of tens of thousands of miles of light rail tracks, and thousands of streetcars. GM's dummy corporations directly acquired and eliminated streetcars in over 25 major American cities, and indirectly eliminated streetcars from dozens or other cities through bribery and economic pressure on railroads who owned streetcar systems and banks. GM and its co-comspiritors were brought to court and found guilty of conspiracy to monopolize transportation in the sale of buses, fuel, and supplies. As a result of their guilty verdict they were fined $5,000.

Many cities these days are having to spend billions of dollars to only partly recreate the lost light rail system abandoned in the 1940s and 50s. San Francisco's BART system, Boston's Big Dig, and Minneapolis-St Paul's light rail systems are only some of the examples of new trolley systems. San Diego now has three light rail lines servicing areas of the city running from the Mexican boarder to well north and east of the city.

Which side of this debate are you inclined to support? Would huge corporations conspire illegally to insure they created wide demand for their goods and services? Or is the loss of streetcars the result of individual consumer decisions to stop using public transportation and buy cars?